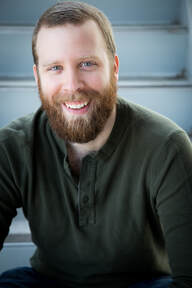 Chris is an actor, director, playwright, theatre-maker, and educator with a decade of experience in arts education. Chris has had the privilege to work with some incredible theaters in Atlanta, Nashville, and Orlando, including the Atlanta Shakespeare Company, Georgia Shakespeare Festival, Arís Theatre, Nashville Shakespeare Festival, and the Orlando Repertory Theatre. As an actor and director, he’s worked on over half of Shakespeare’s canon (only 16 left!). He was a founding member of The Seedling Project, an experimental theater collective that was driven by Theatre for community, Theatre for research, and Theatre for growth. It was pretty groovy. Previously, Chris served as an Arts Integration Specialist with United Cerebral Palsy of Central Florida where he won Teacher of the Year in 2018. Most recently, Chris was the Director of Education and Outreach at Synetic Theater where his programs connected with over 25,000 students in the DMV area. He lives in Norther Virginia with his wife, and two pups, Pippin and Penny
Tweets by wtwdrama
Woodson Drama 2017